Rick, I’m remodeling my home and the plumber and contractor are both pushing for plastic PEX pipe instead of copper right now. And I’ve got a neighbor down the street who has PEX, and he said his water smelt and tasted weird for a while. So I did a little research and found out that sometimes PEX leaches chemicals into the water. Is that really a thing? Can you tell me a little bit more about the differences between PEX and copper?

Sure. Well, first of all, anybody who is remodeling or building a new home or has a reason that they feel they need to repipe their home, needs to understand the difference between the plastic PEX piping and the tried-and-true copper option.

By the way, if you have pinhole leaks, regardless of how many you’ve had in the past, you do not need to repipe your house. You simply need to fix the water chemistry and we have a 12 year track record of preventing future pinhole leaks going forward. While staying with the existing copper infrastructure.

The difference between copper and plastic is that plastic is off-gassing, MTBEs and different chemicals. To the defense of the plastics industry, they are meeting the federal standards, but you have a choice between something that does that, as well as gross slime internally and copper, which is slightly bacteriostatic, thus inhibiting growth internally. And has twice the lifetime at 50 years as long as you fix the water chemistry and does not introduce anything foreign into the water that could potentially be considered hazardous.

So our position is you need to do the research yourself. You need to understand the differences and make your own choice.

Pure Elements Water filters are on SALE during Covid-19 at 25% OFF. Details are here: https://pureelementswater.com/safe-deals

Got Hard Water trouble? Check out this post: http://stoppinholes.com/what-is-hard-water/ 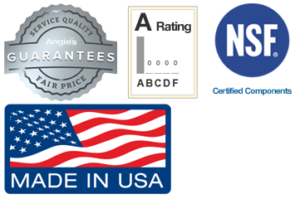